In my off-the-bike life, I'm also a classical musician.

Fantasies for a Modern Recorder is an album of unaccompanied music from four centuries, played on the Mollenhauer Helder harmonic tenor. My aim with this album was to showcase the capabilities of this amazing, innovative, and under-appreciated instrument - not only for original contemporary repertoire, but for a huge variety of music written for other instruments that is usually not accessible to the more familiar Baroque recorder because of its more limited range.

The album also includes three new pieces written for this project, specifically for the Helder tenor (although they would also work well on a modern Boehm-system flute) by three different composers: Melika Fitzhugh, Michael O'Brien (my dad), and Janet Peachey (my mom). I am deeply grateful to all of them for their work, and for expanding the original repertoire for modern recorders.

You can download the album booklet here as a PDF.

* Piece commissioned for this project

CD - "Fantasies for a Modern Recorder" 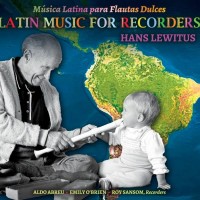 This recording is a collection of charming duet and trio arrangements by Hans Lewitus of Centra..